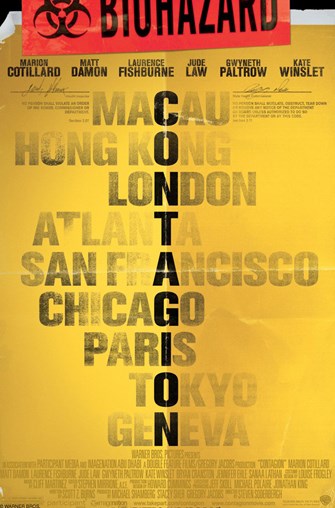 Oscar®-winning filmmaker Steven Soderbergh (Ocean's Eleven films, Traffic) returns to large-scale cinema with this global action thriller that revolves around the threat of a deadly outbreak of a fatal disease and the people determined to keep it at bay. As the fast-moving epidemic grows, the worldwide medical community races to find a cure and control the panic that spreads faster than the virus itself. At the same time, ordinary people struggle to survive in a society coming apart. A stellar international ensemble cast including Academy Award® winners Matt Damon, Gwyneth Paltrow, Kate Winslet, Marion Cotillard and nominees Jude Law and Laurence Fishburne portray the dedicated doctors at the CDC and World Health Organization who rush to contain the outbreak of a new virus. Tracking its source to Hong Kong and searching for a cure, these determined Samaritans do their utmost to limit deaths, civil unrest and the false rumors surrounding the disease in this viral outbreak drama with multiple plot lines in the style of Soderbergh's Oscar®-winning narcotics drama Traffic.